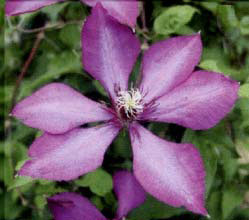 Varieties with viticella and texensis genes prosper in northern climates, as do most large flowered hybrids and the species C. integrifolia. Avoid ‘Montana’ groups and anything with ‘Florida’ in its name, as they dislike the cold.

Dig a hole the size of a bushel basket and mix the removed soil with good quality compost. Replace the amended soil in the hole and dig a hole big enough to hold the root ball. Fill it with water and let it drain. Place the root ball in the hole, and bury it two to three inches deeper than it was planted in its pot. Fill around with the removed soil mixture and water again. Clematis thrive in well‐drained, fertile soil.

Clematis roots need to be kept cool and moist, either by mulching with organic matter or by planting low‐growing perennials around the base of the vine. Keep the plant wellwatered for the first summer, at least an inch of water each week. In the early spring, scratch a cup of Rose Tone into the surface of the soil around the clematis and spread compost around the base of the plant, making sure to stay clear of the vines themselves. Do not fertilize once the plant begins to
flower, and do not add fertilizer in the fall.

There are three pruning groups – “No Prune”, “Moderate Prune”, and “Hard Prune”. Plants should be pruned in early spring. Different varieties require more or less pruning and there are some rules of thumb which apply. “No Prune” clematis all bloom early (May in northern climates) and often have downward‐facing, bell‐shaped flowers. Clematis that bloom later (June on) are either Moderate or Hard Prune. All Moderate Prune clematis have the traditionally shaped flowers and include most bi‐colored clematis. If you are still unsure, the best approach is to prune it moderately, cutting it back halfway, then
watch it carefully the next summer. A Moderate Prune plant will bloom both on the old wood and on the new growth. If it blooms only on new growth, mostly at the top of the plant, it is a Hard Prune clematis and should be cut way back. “Nobody ever killed clematis by making a mistake pruning. The worst you can do is interrupt blooming for a season”.

These are all Hard Prune varieties, easy to care for, disease resistant, and have good bloom the first year :